One of the projects for an information design class was to take an article and illustrate it. I chose the following:

The article I chose had a lot of percentage and comparison however they were all mixed which I found quite misleading and unclear.An example of this can be found when presenting the results of a study conducted in 2011:

I looked deeper in the studies they used as reference and tried to portray the omnipresence of transgender woman of colour in the victims of homicide. I looked had what been done before on the subject and the aesthetic used when relating to the subjects of LGBTQ, Transgenders, Homicides, Bullying, etc. I did a few tests using the gender symbol, but felt that when using them as frame or content holder it became too cliche. I opted to use them as a texture. Initially I made the symbols with geometrical shapes but it lacked something. I started doing them by hand and I would argue it gives it more of a human perspective and a raw aesthetic which I felt was appropriate given the fact I was talking about Homicide Victims. The biggest challenges I had were to make a link between the 2 pie charts and the flowchart overall. In order to put emphasis on the omni representation of transgender woman of colour in the victims I had to give the proportion that they represent in the victims and survivors of Anti LGBTQ violence. Making a link between the two of them and explaining the difference between them proved a lot harder than anticipated. For the flow chart, I had missing data points to be able to have a full spectrum of the demographic of the victims. I think by simplifying it I managed to retain the essential information. 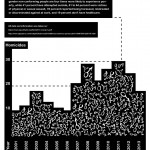 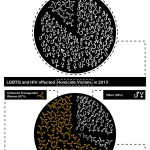 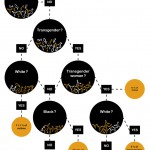 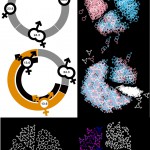